On A Red Sand Road To The Sky

ON A RED SAND ROAD TO THE SKY


Going out towards the wide white pans
Where salt lakes spread like mirrors
of the thirsts, the hungers of the sky.
Posted by Wayne D Knoll at 01:33 No comments: 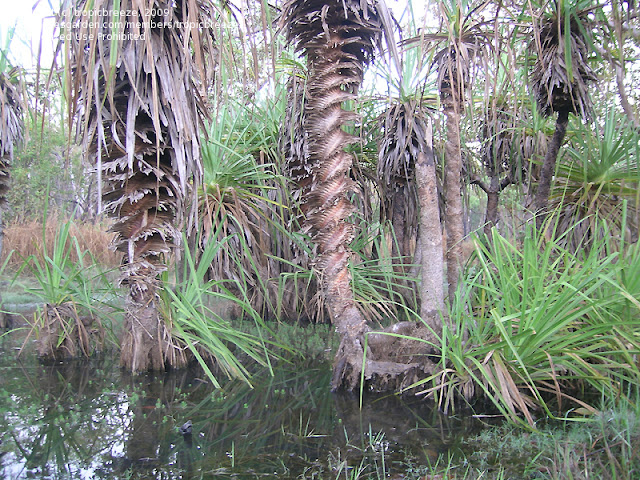 Usually perched oasis-like on
the very brink, taking their big drink,
edging along a long bar of open water

Pandanus spiralis, on elbows, its palms
of long leaves lean up off slouching stalks
in twisted waves of air-swimming hands

unwashed, untidy, shambolic as any bushie
they lounge across all the best places
sticking the place up with gun-spines

that hide the water's edge, that cover
up the small paths down, the wallaby tracks
or pirate haven carnivore-eyed drinking places

beside the lagoon, billabong, water-hole
where crocodiles might be if water-roads
channel them in, like palm-skin relatives

of the ancient orders of life, reptile
and palm, old allies of the primordial
times now relic under jet-trailed skies

where pineapple-like clusters of pandan fruit
attract flying foxes, those night-fruit bats
that drug-sniff them out orange-red and ripe. 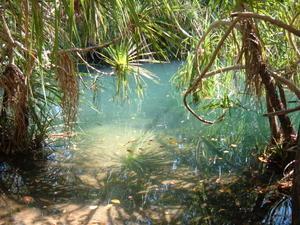 Live As We Go

LIVE AS WE GO

Watching the road,
watching the wide road
a picture rolls out to us
a pavement goes under us
right and left brushes the sides;
better than movies,
bigger than TV;
a never-ending unscripted
picture-show coming live
as we go,

Watching the wide
wide roads, world's slow
to a stop and go past us,
country gets over us
and by us, we're pilgrims
watching the road to find
which way to go, where
to go for a way to be,
for a place to belong, or
a new direction to turn.

Watching the road
wide of the atlas
looking for a map of
the heart; discovering
the directory of the soul,
poring over side tracks,
and possibilities, possible
ways through the pathlessness,
searching for the next bend,
the right way, for a call
which echoes home.

Watching the uncharted
road, and going there
where we're watching,
off maps of roads already
travelled, or beneath them,
on a journey to the outer-
most step, at the stockgrid
of heaven, for the next
never-ending picture show
coming live as we go,

Watching the deep
road, walking over
the graves of the past
to find the back story of here
where we might find how
it all came to this, how
the end might be, or could be
as what might have been, but
was not, can be seen again to
inspire with the example of
the congregation of saints
and then caution of the sinners
we travel over in time...

All the time wondering if
we do in eternity.

- written on the Mataranka Road, after heading north off the Stuart Highway. With thanks to my younger son who wrote this down as I dictated from the driver's seat. For a song lyric
Posted by Wayne D Knoll at 03:43 No comments:


No crown but
a thing put around the neck
only not so much like say pearls
of royalty, or diamonds on a silver chain
or even of gold,
neither in a gold or silver
clasp but more like that other
more unspeakable neck-worn thing
only made of tin

on an iron chain
else on a knotted rope-string
by 1885 and afterwards this badge
of health was what kept
them the tin badge-makers
branded 'niggers' from being
unhealthy on sight if they
so much as dared to cross that,
tin-decreed dividing river.

Tin like them new rooves of Elsey
for thunder heavy rains of the Never Never
in rifled south-eastern Arnhem Land,
on the tropic gun-range grasslands of the River Roper
was the rule at Elsey Station, same as Hodgson Downs,
as it was elsewhere then, a conquerer's rule
come in at Florida station up north Arnhem Land
in cross-cultural communication the natives were
gun-commanded into understanding
the reloaded orders about how
not to cross the river

for the good of their health,
the same, although on the Roper,
the good whitefellas made exceptions,
and so gave presents of tinplate badges,
on a chain or a string, as a necessary,
like passports back into a conquered martial land,
real badges of health like government policy
to be worn if one came across that
styx, that river and wanted
to remain alive

the river of a tin-made border
that sprung out of the barrels of guns
that bubbled out with the stream of life
chosen as the whiteman's cattle were
only without their own long-faithed
white husbandry-music in ancient cowbells,
animals with no tethers,
without yokes
or chains

or fences,
watched by health-conscious
animal riders
the cattle went about
like game
into blackfella's river crossing places
where the tinplate
badge wearers went, or else came
like banded lepers.


* 1. Florida Station on the Goyder River 1885: "The niggers of this part of the coast had a particularly bad name. At the station, Florida by name, twenty miles up the river, the aborigines were never allowed on the same side of the river as the settlement. It was a case of shooting at sight if they did venture across." - [pp.185 - A. Searcy "In The Australian Tropics" -George Robertson & Co, London & Melbourne, 1907]

2. West of Roper Bar 1885: "I was informed that [the Aborigines] were not allowed across without permission, and when given this, had to wear a tin plate slung around the neck. It was bad for the health of one crossing without a badge." -[ pp.113 - A. Searcy "In The Australian Tropics" -George Robertson & Co, London & Melbourne, 1907] 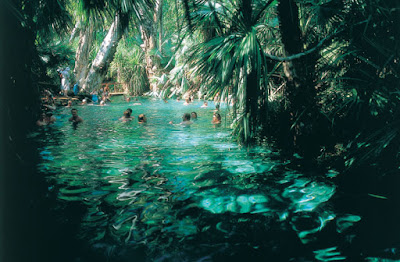 
Swim-water after
the dry desert dust
was such a joy, and is.
Mataranka quenches with
graced relief,

with the saveless life-
water let of native veins,
cut gracelessly and stifled
of their country's springs,
their hearts. 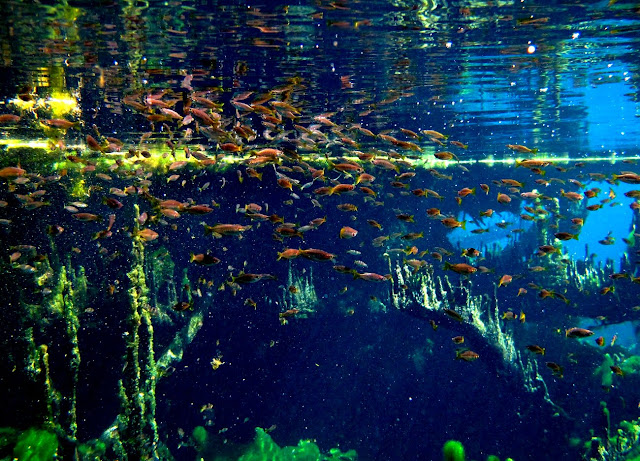 Mirlinbarrwarr : Refuge On the Roper

MIRLINBARRWARR: REFUGE ON THE ROPER

Below Mataranka
seventy miles from the Gulf
in lands ridden to the bone
with spilt blood
by the years of the white rider
of the shareholder dreaming,
of the meat freezer dreaming
where human meanness lifts
its truth from beneath its masks
with dreams of wealth and power
whatever else the dastardry
from big-houses of Melbourne
ordered, its fields to fire,
with frontages to be added,
with appearances to meet,
with reputations to forge
to be seen as if they were
better men...

as if into the maelstrom
three down-south whitemen
came as Christ's missionaries
from another Melbourne, one
of heart and risk in longing
for those black yet verily made
like them in their Father's image
as if for those most put upon,
those most ravaged by their own,
those called savage to be hunted
like vermin by the veiled savages
among their very own

into the blood never-never
they came like quiet birds
to a song for the ever-ever
with three native missionaries
from Yarrabah by the lugger
'Francis Pitt' west into the
Gulf of Carpentaria and another,
and were well met by Gajiyuma
of the Mara, and guided up the
Roper river to Mirlinbarrwarr
in 1908 to work together
in the breach, the breach

needing bridging, the gulf
which the freezer riders
had ensured was emptied,
putting hands to plough
for the greater pastoral,
providing a haven where
the hunted and despised
of God's outcasts could
sit down alive of ear
and be heard of him.
Posted by Wayne D Knoll at 19:22 No comments:

Wayne D Knoll
I am a 4th-to-6th generation Australian of Silesian (Prusso-Polish), Welsh, Schwabian-Württemberg German, yeoman English, Scots, & Cornish stock; all free settlers who emigrated between 1848-1893 as colonial pioneers. I am the 2nd of 7 brothers and a sister raised on the income off 23 acres. I therefore belong to an Australian Peasantry which historians claim doesn't exist. I began to have outbreaks of poetry in 1975 when training for a Diploma of Mission Theology in Melbourne. I've since done a BA in Literature and Professional Writing and Post-graduate Honours in Australian History. My poem chapbook 'Compost of Dreams' was published in 1994. I have built a house of trees and mud-bricks, worked forests, lived as a new-pioneer, fathered-n-raised two sons and a daughter, and am now a proud grandfather. I have worked as truck fresh-food farmer, a freelance foliage-provider, been a member of a travelling Christian Arts troupe, worked as duty officer and conflict resolutionist with homeless alcoholic men, been editor/publisher of a Journal of Literature for Christian Pilgrimage, a frontier researcher, done poetry in performance seminars in schools and public events.